Jameson is the #1 selling Irish whiskey in the world and very often the #1 selling whiskey in any category (it flirts with that title with Jack Daniel’s). In 1870 it was already well on its way to that title being the second largest brand in Ireland producing nearly 1,000,000 gallons annually.

Nose is floral, citrusy and slightly sweet. Taste is light, moderately sweet with strong malt and grains. Finish is short with cinnamon, vanilla and grass.

Nose is light with floral, citrus and cinnamon notes. Taste is slightly sweet with mild grains, some caramel, vanilla and chocolate. Finish is medium length, crisp and grassy with lingering notes of vanilla and cinnamon.

Taste is rich, creamy and slightly spicy. The citrus contrasts the sweet notes without overwhelming. Easy to savor and easy to drink. A perfect match to either the apple cake or the bread pudding.

Taste is rich, creamy and thick. Finish is creamy and very long with complex spice notes, vanilla, chocolate and malt.

This is the precursor to the Manhattan. It seems to have been developed in the 1890s, about 20 years after Fogg would have been through. The cocktail is sharp, robust and slightly bitter with almost no sweetness.

Recipe: 2 oz bourbon,1 oz sweet vermouth, 1 oz Campari. Stir over ice for 60 seconds, strain and garnish with an orange twist. (For the flight, pour size is half.)

Larceny is named for John E. Fitzgerald, who, in the 1870s, was a federal bonded treasury agent who made a fortune by ‘appropriating’ the best bourbons and reselling them under his own name. He was part of a tax evasion conspiracy so large it reached up to O. E. Babcock, then President Grant’s personal secretary.

This bourbon is a small batch containing less than 100 hand-selected barrels. Nose is strong wheat with notes of toffee and butterscotch. Taste is buttery caramel, honey and mild spiciness with a rich mouthfeel. Finish is long, gently sweet and savory with subtle grain and grass notes.

From the marketing department: A spirit so finely crafted that in 1870, bourbon pioneer George Garvin Brown bottled it, sealed it, signed it and pledged: “This is mine, I guarantee every drop.”

Old Forester was the first bourbon to be sold by the bottle only. It launched in 1870 and would have been just appearing in New York in 1872. The newly released 100 proof Signature edition is a small batch from hand-selected barrels and most likely is the closest we’ll get to the flavor profile of the 1800s version.

Nose is strong and complex with the typical caramel, vanilla and oak plus rich spiciness with cinnamon, clove, black pepper, allspice, nutmeg and orange. Taste matches the nose with excellent balance of the flavors. Finish is long with the sweet notes falling away early letting the spices linger.

Like the Old Forester, the Old Fitzgerald brand hit the market in 1870. Unlike the Old Forester, which was sold only in the bottles and targeted the average whiskey drinker, Old Fitz was sold by the barrel and originally exclusively to steamships and railways giving it a certain allure. (It was later discovered to have been sold to gentlemen’s clubs in larger cities as well.) If Fogg were to have had a fine bourbon on his railway journey across the United States, this would likely have been it.

Nose is very soft and sweet with oak, vanilla and some fruit. Taste is a bit rough with notes of grains, barrel char, leather and light spice. Ice brings reduces the barrel flavors and brings up the sweet and nut character. Finish is medium length, hot and slightly oily with flavors of raisins, orange peel and oak. Ice reduces the heat and oiliness.

A New York State of Mind 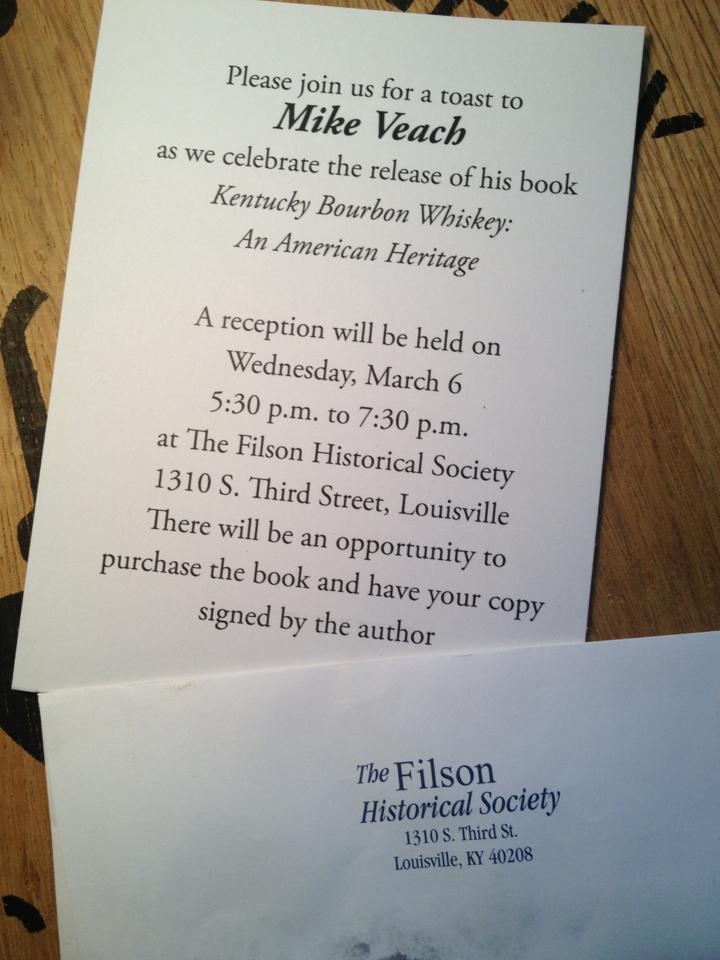 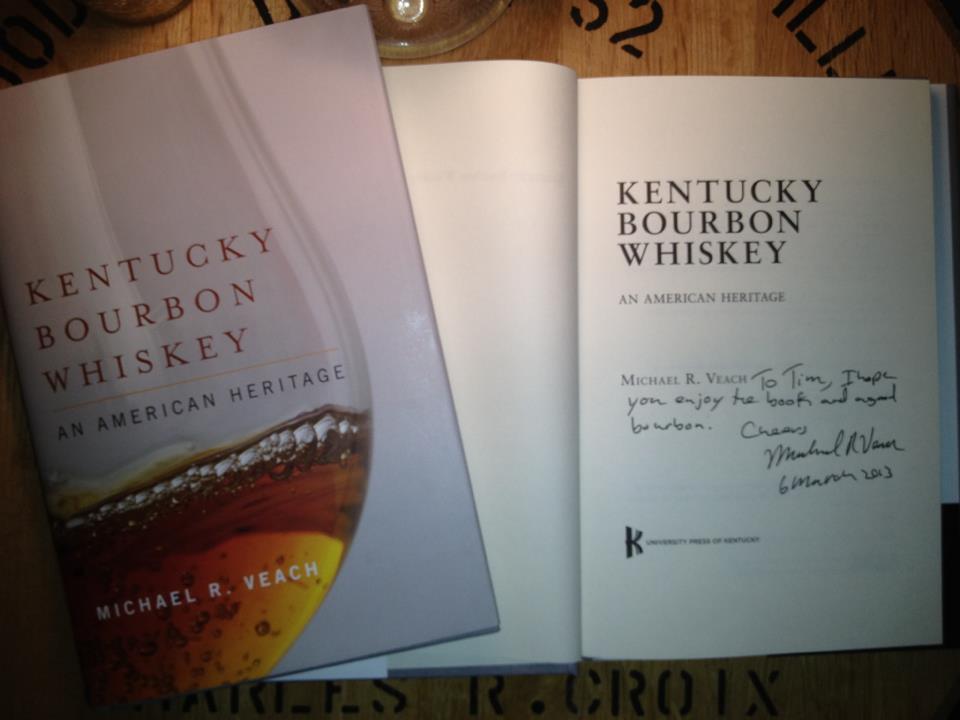 There are three key components to craft bartending:

The Old Fashion is a fantastic cocktail but unfortunately it tends to be mangled more than it’s made right. As much as I praise Mad Men for helping to reinvigorate craft cocktails, Don Draper does not make a hell of a cocktail (spoiler: this video horrifies me).

A few notes on what an Old Fashioned isn’t:

A stickler could successfully argue that an Old Fashioned is actually just a bittered sling, citrus optional … and there’s ample historic evidence to support that. But your average consumer has a vision of an Old Fashioned with orange and cherry and I tend toward making what my customer expects rather than something historically accurate.

The Old Fashioned lends to some very nice variations. For example, restricting the fruit element to just the bitters and the expressed orange oil makes for an excellent cocktail that’s more bourbon-forward. Check out this video for this variation (and notice how different it is from the Don Draper version!).

Here’s my recipe and video for the Ultimate Old Fashioned with Spiced Maraschino Cherries: 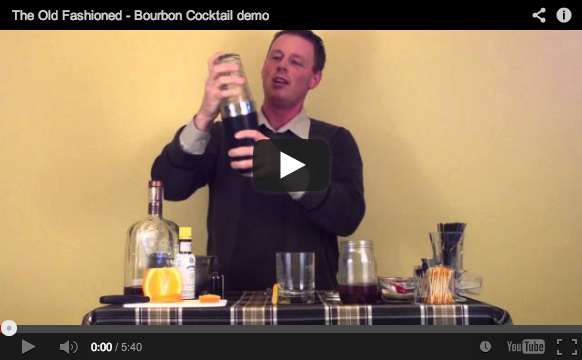 Here we walk through the three keys of craft mixology with this cocktail:

This Old Fashioned recipe uses spiced maraschino cherries as a key ingredient. I use the recipe from the Cupcake Project Blog here. These are well worth the time to make.

Do not use standard “maraschino” cherries! If you must buy, get a real maraschino cherry like the Oregon Bordeaux cherries.

Put your bitters in a dropper bottle. It’s far to easy to overwhelm a cocktail by dashing just a bit too much bitters in it. Measure your alcohol, too! If you don’t have one, the OXO SteeL Double Jigger

is the best I’ve ever used.

Shake, then shake some more. It’s an arm work out to get the sugar to dissolve this way but it’s worth it because the sugar abrades the orange and cherry and extracts maximum flavor into the drink.

Double-strain! There’s an enormous difference between a finely-strained cocktail and one with pulp. If you leave fruit pulp (or – shudder – pieces of fruit) in a cocktail like this, it will cause separation over a few minutes. You’ll wind up with fruit bits on one layer, alcohol on another and a skin of water on the top.

Fruit juice and oils are in the drink, whole fruit is in the garnish. Keep it that way.

The best Old Fashioned you’ll ever have. 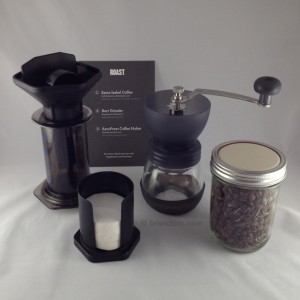 Watch the below video for my review.

For more videos related to this box, visit: http://bespokepost.com/box/roast

(full disclosure this is an affiliate link)

Edit Jan. 13, 2013: In case you find yourself in need of justifying any of the above items, check out this article at The Atlantic on the health benefits of drinking coffee: 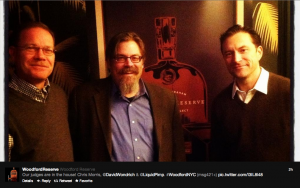 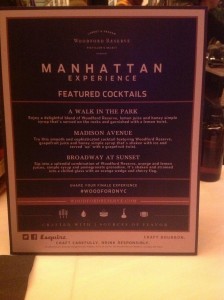 Contest recipes in order of presentation:

Twitter hash tag #WoodfordNYC will get your posts with additional photos of drinks and the event.

More detailed recipe instructions and photos of each drink and mixologist can be found on Bourbon Blog.

In honor of tonight’s 4th Annual Woodford Reserve Manhattan Contest I’m going to post the recipes from the 2012 contest. If you would like to follow along with this year’s contest, starting at 7:30pm EST January 7th 2013, follow Woodford Reserve’s Twitter feed at: twitter.com/woodfordreserve

There was a full house at the Woodford Reserve Manhattan Experience in NYC 2012. 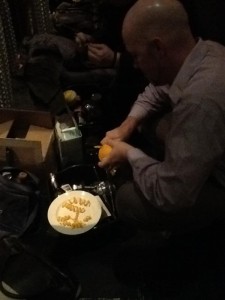 The bartenders scurry to prepare garnishes for the competition.

Recipes are in order of the competition: