As a surprise to no one, I’m a big fan of whiskey barrel aged beers. Being that I am fortunate enough to live in the heart of bourbon country where we are experiencing a renaissance of craft brewing, I have easy access to a pretty decent number of bourbon barrel beers. 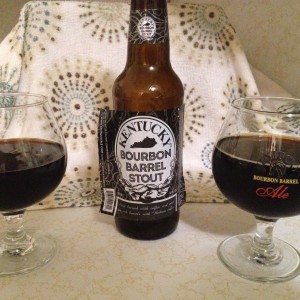 Yep, the label’s coming off the bottle. Not something I would ever hold against the contents of said bottle but in this case it should have been an indicator of things to come …

Appearance: Almost jet black with little to no head. Poured the last few splashes from a good foot above the glass and couldn’t get much foam out of it.

Nose: Overwhelming coffee, faintest touches of vanilla and dark spice. I don’t say ‘overwhelmingly’ lightly – it seriously smells like a cup of Starbuck’s. Oddly (and disappointingly) there’s none of the chocolate notes you usually find in either stouts or bourbon barrel aged beers.

Taste: Coffee, very light hops, faint dark spice, light grains. It tastes much as you’d expect from the aroma. The rumor is the barrels come from Woodford Reserve but there’s nothing in the flavor reminiscent of good ol’ WR. (Actually, there’s nothing reminiscent of any bourbon at all.) Unbalanced and rather uninteresting on the palate.

Of the 4-pack I purchased, 3 bottles are left and I suspect it will stay that way until the next time I make beer bread or beer-battered fish. 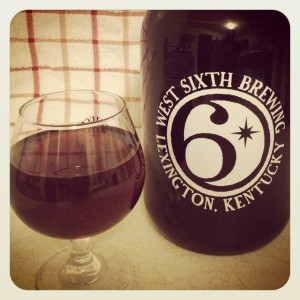 Appearance: Dark brown to light black with a solid but not too thick head.

Nose: Vanilla and caramel at the front with a strong aroma of dark spices, raisins and chocolate.

Taste: Rich and creamy with all of the flavors from the nose in the same balance. The dark spice resolves into pepper, allspice, cumin and coriander. Additional stony fruits – black cherry, peach – appear in the mid-palate. The flavors come in waves starting with the rich and sweet notes, then the fruits and finally spice on the finish.

One glass quickly became a take-home growler, which is now half empty. West Sixth has hit the local craft beer scene hard with quality beers in a whole range of styles. Their Slap Happy is going to be a benchmark for the other brewers – it’s bourbon barrel done so right.

True beer connoisseur I am not, but I will admit that I might have tasted these two unfairly against each other. Yep – the Alltech BB Stout was bottled and the West Sixth’s Slap Happy was draft. I can discern a substantial difference in the Alltech BB Ale in bottle versus draft, so I’ll give the BB Stout another chance next time I’m somewhere it’s on tap. Also, the BB Ale had its ups and downs for the first few years on the market so I’ll try the BB Stout again much later to see if it’s improved.

The Slap Happy, on the other hand, I’ll buy every chance I can get.